Running Mathematica under Arch Linux on the Pinebook 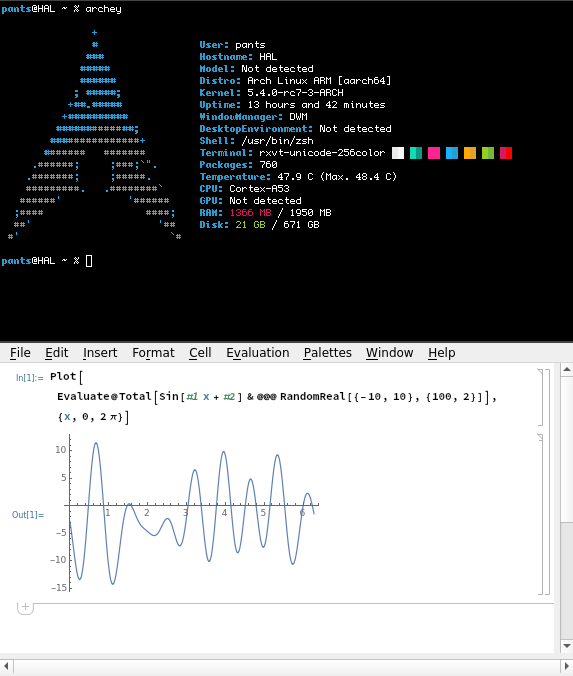 I recently got a Pinebook to use as my primary laptop after my last one died. It’s a lightweight little laptop made by Pine64, a community of open source hardware hackers. To keep things cheap, low-power and open, the Pinebook’s processor is an Allwinner Cortex-A53 64-bit ARM processor. Not a big deal; I’ve used Arch Linux ARM (ALARM) before when I had an ASUS Chromebook, and the open and documented bootloader on the Pinebook made it easy to get the aarch64 architecture ALARM distribution running.

I use Mathematica quite a bit in my research, and as proprietary software you can’t build it for a new architecture. Fortunately, Wolfram has a build of Mathematica for ARM intended for the Raspberry Pi, which I was familiar with from my Chromebook days. Unfortunately, they do not have an arm64 build: it’s meant for armv6h. To run it, you need a processor and kernel that can interpret armhf binaries and the system libraries Mathematica needs for the armhf architecture. The following is the cleanest way I found to do it within Arch.

If you have a Pinebook you already have a CPU that can execute armhf instructions, so that’s a start. Now we have to make sure our kernel will understand and allow them. The packaged ALARM kernels for aarch64 don’t have the backwards compatibility features turned on by default, but that’s not a big deal since they have to be patched for the Pinebook anyway. Check /proc/config.gz to make sure CONFIG_COMPAT, CONFIG_ARMV8_DEPRECATED, and CONFIG_COMPAT_BINFMT_ELF are enabled. The first option provides the compatibility layer at all, the second ensures several armhf instructions used by Mathematica are actually supported, and the third ensures armhf binaries can be easily run in userspace. If these are set, congrats! If not, you need to recompile your kernel.

Ensuring the correct shared libraries are in the places Mathematica expects them has the potential to be the most difficult part. For most things Mathematica will check the LD_LIBRARY_PATH, but wants /lib/ld-linux-armhf.so.3 to exist and point to an appropriate glibc library.

Many distributions have multilib repositories that can be activated by changing a configuration file. ALARM has no such thing, but it does have repositories built for other architectures. Rather than mess with hand-rolled multilib packages that would probably lead to dependency hell, we’ll take advantage of Arch’s small size and install an entire armv6h distribution in a chroot.

Make sure you have arch-install-scripts installed, and copy your pacman.conf to /tmp/pacman.conf. Edit the temporary file and replace the architecture with armv6h. You can then run

to install an entire ALARM distribution for the new architecture to /armv6h, along with several libraries Mathematica will look for. Follow the Arch install guide to set up the locale, and perhaps install a terminfo package.

You now need symlinks for the libraries. I’ve written a package that symlinks the glibc library to the right place, and links /armv6h/usr/lib to /usr/libv6h (my later wolfram-engine and wolframscript packages depend on the libraries being available in /usr/libv6h). The package might be overkill, but I don’t like files the package manager doesn’t know about floating around my system. The nice part about this setup is that for basically no work we get the libraries we need, and all the resulting files are managed by one of the pacmans (pacmen?). The armv6h libraries can be easily updated by chrooting in and running pacman as usual.

We can finally arrive at installing Mathematica. I’ve written PKGBUILDs for wolfram-engine and wolframscript that source the Wolfram-provided deb files and packages them for Arch. The package modifies the included “Executables”, which are actually scripts that set up sane enviornments for the binary executables. First, they have some logic that attempts to deterine the system architecture and will fail if they can’t recognize it. The patches add a condition for aarch64. Second, their LD_LIBRARY_PATH variables need to prefer /usr/libv6h to /usr/lib, and the patches ensure this.

Once built and installed, you should be able to type math at the command line and have the Wolfram engine launch! You’ll need a software license, but for the scripting language and command line interface there are free licenses available. I found that the online activation wasn’t working (probably could be fixed by installing openssl-1.0 in the chroot), but was able to register by generating a password on the user portal.